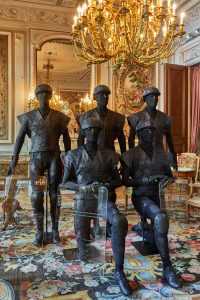 Fly Nowhere has taken the discipline of kit design into experimental territory for its latest project, appearing at the 13th edition of the contemporary art biennial Manifesta Biennial — hosted this year in Marseille, France — having designed and produced a series of conceptual goalkeeper uniforms for an exhibition titled “The Keepers” by Russian artist Arseny Zhilyaev.

The installation presents fragments of a museum exhibition from a potential future, and Zhilyaev tapped Fly Nowhere to work on a costume display that commemorates a football match in a dystopian Marseille, with an imagined ultra-defensive version of the game featuring only goalkeepers, played between groups in social conflict — police, residents, activists, and artists. The photo shown here is from the first of four installations — the police, at Musée Grobet-Labadié. The displays are being hosted in prominent institutions around the city.